ACTS OF HUMANITY NOT UNCOMMON FOR WISYNCO BOSSES 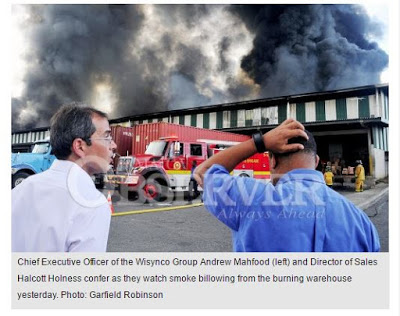 People who know Messrs Andrew and William Mahfood well would not have been surprised by the job security assurance they gave to their employees at Wisynco after last week’s fire that completely destroyed the company’s warehouse in Lakes Pen, St Catherine.

For both gentlemen have, over the years, displayed genuine acts of humanity to individuals who have found themselves in unfortunate positions of real need.

If, by any chance, there’s anyone who is still uninformed about the philanthropic nature of these men, they need look no further than the activities of Food For the Poor, their charity founded in 1982.

Food For the Poor’s track record of benevolence is not only impressive; it is heart-warming because it lives up to its mandate of providing for society’s less fortunate.

We remember well that last year Food For the Poor officials shared at a Jamaica Observer Monday Exchange that the organisation was building 1,200 houses annually for needy Jamaicans. At that rate, the charity would have, up to this month, already constructed just under 50,000 houses since its inception.

Last year, as well, Food For the Poor was able to report that it delivered on its promise, made in June 2012, to build 50 schools across the island in observance of Jamaica’s golden anniversary of Independence. That project was completed 18 months within the deadline.

Readers may also recall that in 2014 this newspaper reported that Food For the Poor spent $11.4 billion on its many social projects as demand for assistance increased due to the austerity measures that Jamaica was forced to undergo under the International Monetary Fund-approved economic reform programme.

Amidst all that, the Wisynco bosses told us that being able to give back to Jamaica through Food For the Poor has been far more satisfying than the hundreds of millions in profits earned by the company.

The admission made by Mr Andrew Mahfood has been indelibly etched in our minds: “When you see someone who has nothing get a house or get a new start; or a prisoner who did a petty crime but couldn’t pay his fine but comes out and is now a manufacturer of shoes or a welder because of Food For the Poor, it is more gratifying than seeing net profits.”

In other words, what does it profit a man to gain the whole world and suffer the loss of his own soul?

Equally, his cousin, Mr William Mahfood, told us that being able to give back to Jamaica, whether through Food For the Poor or by making direct contributions to groups and individuals, allows Wisynco to live up to its mission statement, which is to “improve the lives of our people”.

With that type of mindset and deep commitment to the well-being of their fellow humans, it was only natural that these gentlemen would not have entertained any thought of laying off the employees whose jobs were affected by the fire.

That, as Archbishop Emeritus of Kingston Most Rev Donald Reece correctly stated in a letter to the editor, is practical Christianity in action.

Jamaicans should indeed be inspired by this action as it clearly demonstrates how we should treat each other.

Our best wishes to Wisynco as the company recovers from this tragedy.